War for the Overworld: Interview (English): Creative Director talks about 44 patches, new updates and the future 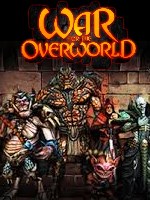 Josh Bishop (Creative Director Brightrock Games): "There's been so many changes it's difficult to know where to begin! Patch 1.5 will mark our 44th patch since release and the combined weight of those updates is encompassed in thousands of release notes.

Since release we've taken to supporting our users as ferociously as possible, we try to address issues as soon as they turn up and get them fixed for the next patch. We've added tools to help manage units more closely, as well as systems like the dynamic tutorial system to help introduce new players to this genre.

We've taken on board a lot of feedback from users and done our best to make changes that enhance the experience. This ranges from all manners of AI changes, performance improvements, visual updates, mechanical changes and huge balance overhauls. Patch 1.4 probably contributed more than any other update with sweeping Quality of Life changes and a number of mechanical improvements that just made the game feel and flow better.

The biggest single addition came in Patch 1.3 when we added the Map Editor, something we achieved through six months of incredible code wizardry as at release it wasn't possible at all. While it currently creates basic levels for Skirmish, Sandbox/Scenario and Multiplayer modes there's been a huge uptake from the community and at time of writing there's over 1700 user-made maps on the Steam Workshop.

We're also looking into options expanding this further, starting with Patch 1.5 we're adding new units as well as the ability to define mutators for the map, but we're hoping to do something more a little further down the line."

4Players: The user reviews on steam changed from "Mostly Positive" to "Very Positive" (last 30 days). Do you think this is a result of your post-release-politics?

Josh Bishop: "We'd certainly like to believe so. Our relationship with our community has always existed at the core of our company and a key part of that relationship is our transparency when communicating with our customers.

In fact we'd say that openness is what ultimately saved War for the Overworld in the long run after a tough launch, we doubled-down, committed, acted fast and openly communicated with our customers to address their needs as soon as possible. We knew we had to regain customer trust and we work every day to build that trust, with things like regular update posts, significant free patches and our completely overhauled support services. Hopefully that shows through to anyone looking in!

Our dedication as well as that of our fans has brought the game to a good place and each patch sees an ever increasing steam user score. Patch 1.4 has averaged 87% through its lifespan with 518 reviews, we hope that Patch 1.5 and the Crucible will set a new record entirely!"

4Players: Are you happy with War for the Overworld and it's success?

Josh Bishop: "We're very happy with it overall. It's incredible to see just how far we've come with it and when we started on this journey nearly four years ago we could not have imagined just what we would eventually create.

For a small worldwide independent team with no real prior game development experience, funded off the back of a relatively minor kickstarter it's just astounding what we've achieved. By all rights we should not have succeeded, it was too big, too expensive and we underestimated the task at hand; but somehow we pulled through, with the right people, the right help and just barely enough resources, we made it.

With that said, we've learned a great deal from our time working on WFTO and if we had started it knowing what we do now, with the resources and technology we have now, we could have done even better. That's a never ending cycle with development however, you're always learning and can always do better, so we'll be taking what we've learned and applying that in the future!

To sum up WFTO is huge, we're proud of it and we're pleased it's been a success. We know that we could always do better but it has filled a void for so many players and every time a player tells us how great the game is we know we did the right thing."

4Players: What comes after update 1.5? Are you considering a sequel or something new?

Josh Bishop: "Although we're naturally coming to the end of WFTOs rather long development cycle we have some very big plans for the future. We've already started work on the next and final major patch for WFTO as well as a second expansion. These two projects are bringing a whole slew of changes to leave WFTO in the best state possible, we're going to send it out with a bang.

We're going to completely rewrite the skirmish AI, release a new campaign with a bunch of new toys for players to get to grips with and that's not even the half of it. There's some really exciting things that we want to talk about but we're just not ready yet. But we expect we'll be sharing more news before all this releases in Q1-Q2 2017!

Beyond that we've started pre-production on our second title currently codenamed Project: Aftercare, that in itself is so exciting for us as it's a whole new chapter for our company, our chance to show what we can do now! Sadly we can't share much on that, all we can say is that it isn't a sequel to War for the Overworld.

That's not to say that the War for the Overworld ends here. We certainly discuss the idea of making a sequel at some point. For now It's time to try something new but when we do return to the WFTO franchise it'll be as grizzled veterans with fresh eyes and a deeper understanding, ready to explore the realm of Kairos once more!"