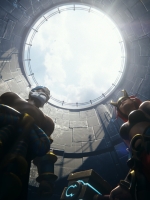 Battlerite has been a project that has gone through a lot of evolution and change within the past four years of development. From its inception as the successor to Bloodline Champions, to an Early Access launch that blew expectations out of the water, to a Free to Play launch that shattered the previous concurrent player record. There have been new Champions, new events, new tournaments and leagues, and a lot of memories and friends made.

We love Battlerite. And we know that you do too. But today we’re announcing that we will be scaling back on development, and things will be changing moving forward.

Battle Season 3 and the associated Battle Pass will be the last that we have planned for the foreseeable future. We are exploring ideas for development after Battle Season 3, and will announce any potential plans closer to the end of the Season. The servers regardless will stay online.

With this in mind, we wanted to share what plans we currently have for Battlerite and Battlerite Royale.

Battle Season 3 will go live on July 10th as planned, and will include more tiers and items to earn in the Free and Premium Passes than before. It will be a longer season, and we’re making a bunch of community-requested changes with it, including:

Besides this, we’ve created a Public Custom Lobby list for Arena to allow players to more easily find matches with each other. You’ll be able to customize these games with the same settings you have in Private Games.

Finally, there will be Event Quests for the first three weeks of the Season – completing the Trials of the Sun God quests will reward Legendary Outfits and Epic Weapons, and there will be two other Epic Outfits and Weapons that can be purchased directly.

The remaining changes and more details will be outlined in the Patch Notes next week.

Battle Season 3 is slated to end on Wednesday, October 23rd. Additional details about development plans for the games will be outlined as we approach this date.

There were a lot of things that we weren’t able to finish, the most notable of these being the Tournament System, which has been in production for a long, long time now. Unfortunately this seems to be the end of the project, and it remains to be one of our greatest regrets for Battlerite that we weren’t able to complete it for you.

On our end we’ll keep looking at how to serve the games and what’s possible for them while we move on to the next project. We’ll be taking everything we’ve learned from Battlerite – what worked, what didn’t work, what we could have done better, and more – to the next game and growing from it all. You’ll hear from us again in the future on the future development plans for Battlerite and when our next project is ready.

From everyone here at Stunlock Studios, thank you again for your years of support.